Raw food health is wellness and the greatest benefit of a raw food diet. 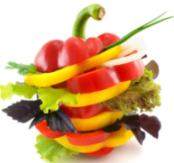 In doing research about uncooked foods and wellness, I was able to contact Susan Schenck, author of the two time award-winning book, The Live Food Factor, The Comprehensive Guide to the Ultimate Diet for Body, Mind, Spirit & Planet.   It hit number 23 in all genres at Amazon.com in January 2009 and has gained the reputation as the raw food encyclopedia or bible. She is also the author of another book on raw food health called Beyond Broccoli. If anyone is an expert in the area of raw food health, it would be Susan. I asked Susan the question below concerning raw food health.

If two people who were very similar, same blood type, in similar types of relationships, similar sleep patterns, did the same type of exercise, had similar stress levels and ate the exact same foods EXCEPT one ate all of their food cooked and the other ate all their food raw, how would their health be different?

Ms. Schenck replied, "The raw fooder would be healthier on every blood test, and as I discuss in Beyond Broccoli, the raw fooder would look and feel younger, and on the average, live longer, according to the 66 studies I have in The Live Food Factor."  Ms. Schenck went on to explain more of the dangers of cooking food as opposed to vibrant raw food health. She said:

"Of the millions of animal species on earth, only humans habitually eat cooked food. There are the notable exceptions of farm and zoo animals, domesticated pets and wild animals foraging in our trashcans, and these also develop the degenerative diseases that humans get from eating cooked food diets.

"Only humans deliberately heat what they eat, and only humans tend to die at or below half their potential life spans due to lifestyle related illness. Typically, an animal in an unpolluted environment will live seven times past its age of maturation. Humans, who reach physical maturity in their late teens or early twenties, should be living to at least 140 years, full of health and vigor up to the last few years.

"Gabriel Cousens, MD, stated in a lecture that there are two types of genes: the genotype, which you are born with and never changes, and the phenotype, which is affected by environment, such as diet and lifestyle. Eighty percent of longevity is dependent on environmental factors, especially what we eat. Only 20% comes from the genotype. What you eat feeds your genes. When you eat the phytochemicals from raw foods, you can turn on the anti-stress, anti-aging, and anti-inflammatory genes.

"Studies show also that cooked food is toxic. When you cook, you create toxic byproducts that are so chaotic and unpredictable, that you will likely never adapt to them. For example, cooked proteins have heterocyclic amines; cooked fats contain lipid peroxides; cooked carbs have acrylamides — all of which are proven to cause cancer. Also, cooking over 118° F will destroy 100% of the enzymes which help with digestion, causing the pancreas to compensate; eventually, it wears out. Cooking also destroys about 84% of vitamins and makes the minerals less bioavailable. The bottom line is, the longer you cook food, and the higher the temperature, the more toxic it is. If you must cook, steaming is far better than grilling."